I drew my influences from studies of African tribal tradition of costumed festivals.  Where the spirits came out to dance.  The performers took on the traits of the spirits or demons, which were exaggerated versions of humanities character flaws.  To the child, as santa is truly real when you go to the mall and sit on his lap, these african tribal “demons” educate a truth about the nature of humanity. Yet even to the adult the actors, were overcome with the nature of the spirits and in this way might have well have been real.  What they provided for the community was a constructive way of embracing both the light and dark sides of humanity.

I began with an investigation into synthetic materials and the sudo-spiritual meaning of these objects.  Focus on modern materials as means to communicate modern “demons.”  I was not originally aware of the meaning behind the costumes or characters I was creating.  They started of as merely a decoration and meaning to dance and perform with a disguise in public. As I began to perform on the street and in class, the characters I had created began to take on greater meanings.  Forming their own personalities and gestures.  Thus a mythology began to grow as these characters interacted with the neo-shaman and his allies. 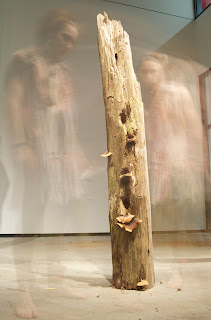 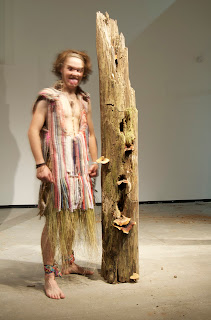